Soshoku kofun, meaning “decorated tombs,” are stone coffins, chambers, or tunnel tombs decorated with patterns and pictures that have been carved, engraved, or painted. Soshoku kofun were made during the late 4th to 7th centuries and there are around 700 throughout Japan, about 200 of which are in Kumamoto Prefecture.

These were first built in the late 4th century. The coffin and lid are decorated in relief and line carvings with patterns of circles, triangles, arcs, and lines. They can be found from northern Kyushu to the coastal areas along the Sea of Japan.

These were first built beginning in the late 4th to early 5th centuries in the coastal regions along the Yatsushiro (Shiranui) Sea. These tombs have a square-shaped stone chamber with stone slabs decorated in relief and line carvings with circles, shields, arrows, and other designs. Sekisho tombs began to spread from the Uto Peninsula to northern Kumamoto in the first half of the 5th century before spreading to the Kikuchi River Basin in the 6th century. These tombs were originally decorated just with relief carvings, but starting northward from the Yatsushiro Sea and the Uto Peninsula to Kumamoto City, the raised areas of the relief carvings began to be painted in red, yellow, green (gray), and other colors.

Hekiga tombs became more common in northern Kyushu beginning in the 6th century and are characterized by colorful decorations. In Kumamoto, walls of burial chambers built starting in the first half of the 6th century were decorated with patterns of circles and repeated triangles. Burial chambers built later frequently featured illustrative decorations, like pictures of people, horses, and weapons.

Decorated Yokoana tombs (horizontal tombs dug into hillsides and mountainsides) started becoming more common in the mid-6th century. Decorations can also be found on non-burial chamber walls, which is something that differs from other tomb styles. Some of the decorations that depict people, arrows, and shields are believed to have been made to ward off evil.

These are the most common decorative styles. Depictions of weapons and armor are understood to reflect the early belief in their spiritual power, and geometric patterns were believed to ward off evil. Depictions of boats and horses are believed to have been created with the intent of ferrying the spirit of the dead to the afterlife.

The museum was established to preserve, utilize, and research decorated tombs based on the Fudoki-no-Oka project advocated by the Japanese government.

Carefully produced reproductions of tomb interiors not open to the public are on display within the museum. Unearthed relics from the preceramic (paleolithic) period and later are also on display.

Haniwa Park is located next to the museum and visitors can walk along paths between the tombs and visit the Iwabaru Tunnel Tombs dug out of the nearby hillside.

The Kumamoto Artpolis Project is a culture and architecture project in Kumamoto Prefecture that began in 1988. The aim of the project is to stimulate the local community by constructing buildings of high architectural integrity with a focus on improving the look and environment of the entire prefecture.

The Kumamoto Prefectural Ancient Burial Mound Museum was built under the auspices of Artpolis.

The end goal of Artpolis is to create a culture in Kumamoto that will be passed on to future generations. 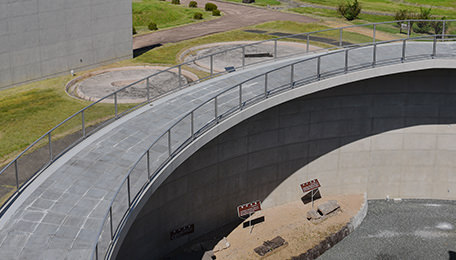